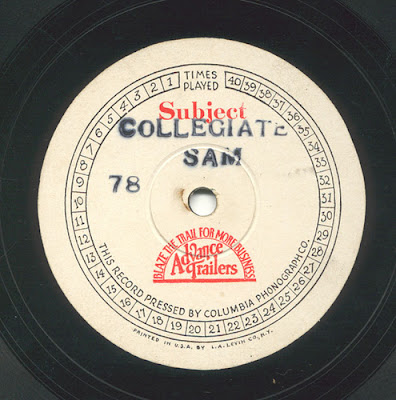 Here's another mystery for y'all...who is this singer? It might remind one of Eddie Cantor, but I'm reminded more of Eddie Walters, a (more-or-less) forgotten ukulele-toting singer who pops up from time to time on dance band records of the early 1930s. I'll probably have to post a Walters side soon to show what he sounded like.

In any case, this record remains a mystery...it's a 12" one-sided piece, pressed by Columbia (mx ST 1416) for some client...a red logo for "Advance Trailers" is present, but is that the client's name? It'd be like getting a Model "A" with no mention of Ford on it...just something that said "Automobiles."

I can't find any film called Collegiate Sam either, so it's doubtful that this is an advance trailer (or at least its soundtrack) to a film of that title... Perhaps this was played between features in a theatre. It's anybody's guess.

In any case, it's fairly hot...with the xylophonist in hyper-drive throughout the record. An accordion is also prominent. Add the trumpet and alto sax...I wonder if this is by The Usual Suspects from the Grey Gull studios (Mike Mosiello, trumpet; Andy Sannella, reeds & steel guitar; Charles Magnante, accordion; George Hamilton Green, xylophone). It could be, but I'm not too sure...the "cordeen" sounds to me more like Cornell Smelser than Magnante. If this was recorded like a typical Grey Gull side (shrill and blasty), I'd have a better idea who it is. The bass sax gallumphing in the background is fun, but it's another fly in the ointment...its presence throws me off the Gull track completely.

And the singer (whoever he is) mentions a Whoopee Hat!! 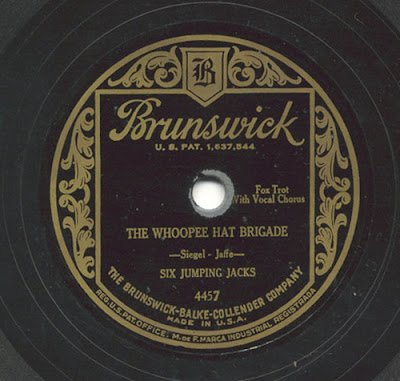 So...what is a Whoopee Hat, anyway? 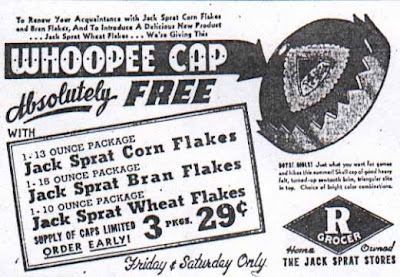 Sometimes known as a Whoopee Cap, it's a beanie with an attitude...usually made of multicolored bits of felt. Apparently they were the rage on campus back then...

They're pretty much forgotten now by everyone...except Mr. Jones: 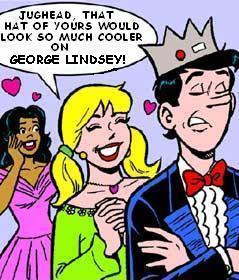 And, getting back to Cantor, he made Whoopee in more ways than one. But I still don't think my record is of him. Who is it?
Posted by ZorchMan at 1:36 AM

Being a lover of obscure 78s I've just had the pleasure of stumbling into your blog and the mystery recording of "Collegiate Sam". Since I have a particular soft spot for Grey Gull and have several dozens of recordings by its house band in my collection I naturally became very curious to listen to this track, and after having done so I am at least prepared to bet a reasonable sum of money on Mike Mosiello being the trumpet player - in particular the playing towards the end of the track is very typical for him. As for the bass sax, that instrument is actually featured in some Grey Gull recordings, however mostly around 1927. Which year was "Collegiate Sam" recorded by other bands?

I'm glad to see that there's someone else out there who thinks that it's the Grey Gull Guys!

I think they were also the house band on the syndicated "Mirth Quakers" shows...a couple of segments are in later postings here.

"Collegiate Sam" was popular in 1929...everybody I've talked to is also convinced the vocalist is Eddie Walters.