As promised the last time around, here are some more goodies from the Boston area.

I'll start off with the earliest...from October 1926. It's Big Brother's Brunswick Record, which is essentially two three-minute bits as presented on WEEI's Big Brother Club show by the youthful Bob Emery (There are two or three other records by Emery out there on the Speak-O-Phone label from a few years later...I've heard only one of them).
There's a nice article about him here: http://www.oldradio.com/archives/people/dh-emery.htm 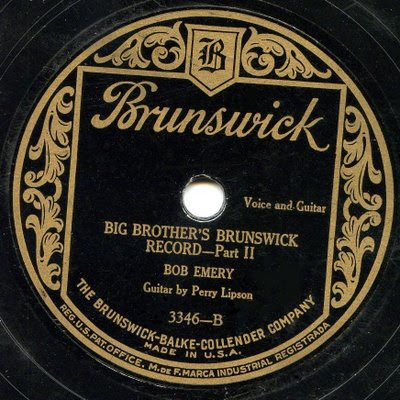 E20318 Big Brother's Brunswick Record--Part I Bob Emery Brunswick 3346 http://www.box.net/shared/3f6hl60gyb
E20319 Big Brother's Brunswick Record--Part II Bob Emery Brunswick 3346 http://www.box.net/shared/thehr8zfcd
October 1926: Bob Emery, vocal, ukulele and speech; Perry Lipson, guitar.
I was a regular watcher of his Big Brother show on WBZ-TV in the early 1960s...
*********************************************
I also watched Bozo's Big Top on WHDH. Frank Avruch played Bozo. There were also regular visitors to the show (between the Bozo cartoons and the games played with the kids in the audience)...the ones I remember were Clank (a friendly robot) and a human-sized rag doll, er, actually a loose-limbed person dressed as one (was its name Rag Doll? It's been too long), who'd flop around to Bent Fabric's Alley Cat.
Another frequent guest on Bozo was Mr. Lion, who would write some lucky kid's name on a large pad of paper on an easel and, with the crayon, transform the name into a picture of an animal then give it to the kid...he sometimes made balloon animals too. I found out recently that this character was played by Carroll Spinney, who eventually became the puppeteer on Sesame Street...he's Big Bird and Oscar the Grouch.
Although I have no records of Spinney's Mr. Lion or Avruch's Bozo, I do have a couple of records that are somehow connected to the show...
Judy Valentine was another regular guest, and she'd sing children's songs and dance a bit too (sadly, when over 100 episodes of this show were syndicated for national distribution, these appearances were snipped, probably to avoid paying royalties). Her childlike voice became a favorite of mine when I was five or six. My dad gave me a copy of this record when I was a preschooler... 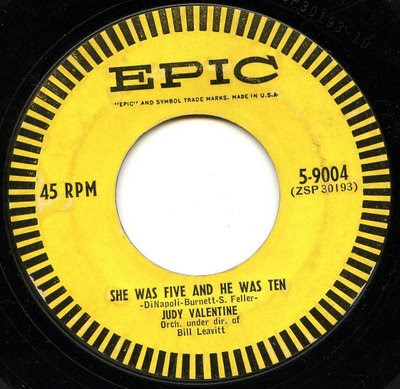 There's a picture and a little blurb on Judy here: http://www.shermfeller.com/judy.htm . One might notice the co-composer of She Was Five is Sherm Feller, who was married to Judy at the time. He later became a legendary local sportscaster.
From time to time (probably to fill some time if the show was running short of material), Bozo would come out with a bowl of peanuts to share with the kids in the audience...as Rusty Draper's Eating Goober Peas played in the background...
...and here it is... 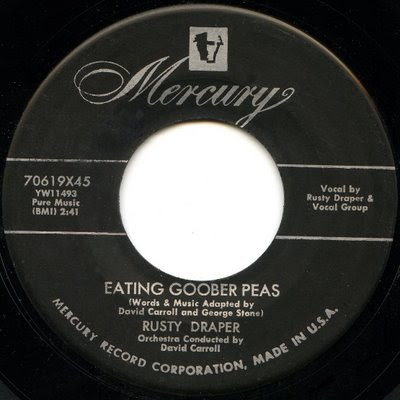 YW11493 Eating Goober Peas Rusty Draper Mercury 70619
1955: Farrell "Rusty" Draper, vocal; David Carroll Orchestra and chorus.
http://www.box.net/shared/4g18b4d0v7
I remember being quite surprised to find that there was a copy of this record in the shoebox of 45s my dad gave me when I was five or six. Little did my parents realize they were creating a vinyl (and shellac) junkie...I must thank them.
*********************************************
And now for something completely different (and not locally grown)...
I recently discovered a very nice blog dealing primarily with 10-inch LPs...and there are some great ones therein. I was very pleased to finally get, in one form or other, the rare Lord Buckley LP on RCA, Hipsters, Flipsters, and Finger Poppin' Daddies (http://big10inchrecord.blogspot.com/2008/05/swingers-part-4.html )...I was beginning to think I'd never see/hear of a copy (without kicking out a minimum of fifty clams, that is).
As a token of thanks, I think I'll offer an interesting supplement.
On an RCA Vintage compilation album (LPV-580 The Golden Age Of Comedy), there's an alternate take to Friends, Romans, Countrymen...in the issued version, the band (consisting of Benny Carter and a few other jazzmen) lays out during most of the monologue. On this take, the band continues to play a blues in the background.
F2PL1617-B Friends, Romans, Countrymen (alt) Lord Buckley RCA LPV-580
http://www.box.net/shared/nfflnt746l
7 January 1955: Lord (Richard) Buckley, monologue; small band including Milt Bernhardt, trombone; Benny Carter, clarinet; Ted Nash, tenor sax; and others.
When I dubbed this cut, I numbered it #6 and put the file in the folder with the issued LP.
*********************************************
Note: The next two 10" LPs are compressed in 7Z format...you can download the free program to open them here: http://peazip.sourceforge.net/
*********************************************
Anyhoooo...I remembered that I had a couple of interesting ten-inchers myself (behave yerself, Robin!)...and both have ties to Boston.
I hope most of my readers need no introduction to Bob & Ray (I've offered some Bob & Ray-inspired prizes like a Komodo Dragon and Uncle Eugene's Special Aged Peanut Butter Sandwiches for my little quizzes in the past), who got together at WHDH-AM shortly after WWII and had a side-splitting professional relationship until Ray's death in 1990. Many of those WHDH broadcasts were preserved and are downloadable at several websites out there. 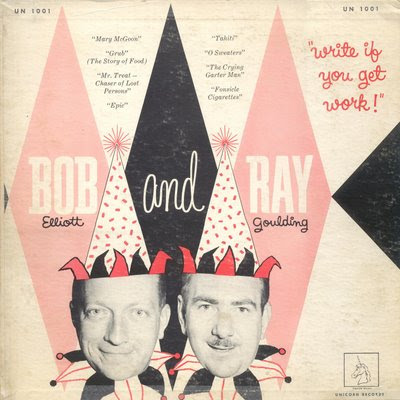 The material on this 1954 Unicorn ten-inch LP, Write If You Get Work, shows up in a scattershot manner in one of those multi-tape compilations that are available through the official Bob & Ray website. Personally, I'd rather listen to the LP the way it was originally issued.
And the LP's liner notes are a hoot-'n'-a-half. 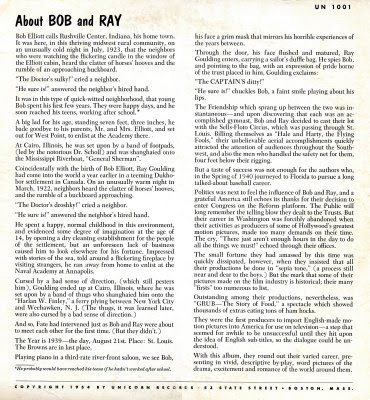 And here is the LP...it consists of one long cut on each side...no banding or separation between bits. 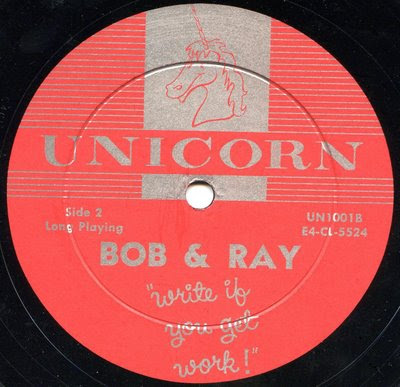 For the sake of convenience, I've divided the album into separate cuts...they're numbered in the original playing order.
WRITE IF YOU GET WORK! Bob & Ray Unicorn UN 1001
http://www.megaupload.com/?d=ET0MX8C3
I was asked to post a Zip file of the album:
http://www.megaupload.com/?d=8FU530DO
1954: Bob Elliott & Ray Goulding, comedy dialogue; with unknown organ.
The Bob & Ray LP isn't too rare...at least not in this area. I've had maybe 5 or 6 copies over the years.
*********************************************
But the following is rare, even around here!
In the mid 1970s, I heard trumpeter Dick Wetmore sit in with the New Black Eagle Jazz Band at the old Sticky Wicket Pub in Hopkinton, MA. He sounded great...and then Stan MacDonald asked Dick to drag out his violin for a couple of numbers. I remember Stan's soprano sax and Dick's violin doing an amazing version of Nuages, the Django Reinhardt chestnut.
A year or two later, I saw a copy of Wetmore's ten-inch LP on Bethlehem in another record collection...of course it wasn't for trade. It took me over twenty years to locate a copy for myself...
This LP was finally issued in 1955, over a year after it was recorded, with no promotion at all. Unfortunately, it was issued as the commercial 10-inch LP was being phased out...and it was never reissued in the USA...even when Bethlehem reissued a number of their early ten-inchers back-to-back as twelve-inchers. This LP remains in limbo here in the States. I know that it's been reissued in Japan, but it'll cost a pretty yen. Actually, 1,575 of them, according to http://www.phonicstore.com/65_441.html . 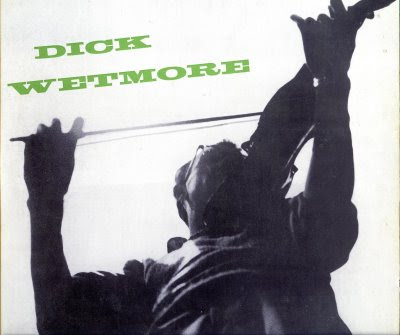 Anyway...I finally did find this copy around ten years ago. I took it home, listened to it a couple of times, enjoyed it, then filed it away.
A year or two ago, I found a reissue of a rare Chet Baker album (recorded in Paris, and only leased from the French Barclay label by Baker's US distributor, World Pacific. I think it stayed in print here for about fifteen minutes.)...one that featured the amazing pianist Dick Twardzik. I listened to it several times at work and enjoyed that as well.

Then about a year ago, I heard about Wetmore's death at the age of 79. I dug out the old Bethlehem ten-incher. I played it at a party at a friend's house, knowing that another Wetmore fan would be there. As I was listening, I heard a strangely familiar tune...looked at the title...it was Sad Walk. I soon realized that most of the pieces on this album were also performed on the Baker album.
So when I got home, I did some research online...as I listened to both albums, back-to-back. I read a fascinating article here langtech.dickinson.edu/Sirena/Issue2/Chambers.pdf , dealing with both albums (and why they are so rare), Twardzik, Wetmore, and the composer of the music on these albums, Bob Zieff. Read the article yourself for more information...which is a bit too involved to really get into here And buy the Baker album. You won't be disappointed. More on Twardzik and Baker's European tour (and an Amazon link to purchase the album) is here: http://www.jazzitude.com/chambers_sadwalk01.htm .
I'll let the Wetmore album speak for itself...I hope you enjoy this rare treat...
This posting goes out (with a lot of respect and many thanks) to Mr. Zieff, who is an occasional contributor to the 78-L group. (I'd have emailed him, but 78-L's archives are in temporary limbo...so I thought that I'd post the album first, then notify the group. The element of surprise adds a little something to the posting, don'tcha think?). I hope he'll let me share this (sinfully) neglected album with the public...it'll have to do until a legitimate copy is reissued in the States.
Note...the original playing order of the cuts is listed next to the personnel on the back cover. However, the liner notes are in a different order...Zieff himself recommended listening to the compositions in this order, as they comprised a suite. I have them programmed in the latter sequence. 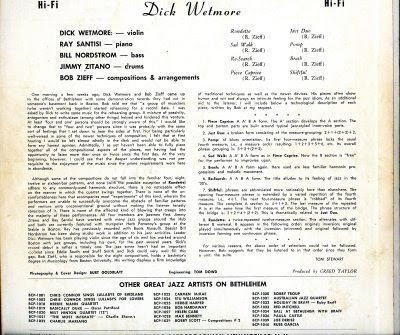 Here's a little trifle for dessert...While my pal Ron was doing the scans for this installment (and I thank ye again, Ronster), I thought I'd peek through the 78s and 10" LPs Ron had put in his "to be digitized" pile. I spotted this one on the Cambridge-based Mood label...I thought the title was interesting.
T.V. Rumba contains quotations from commercial jingles and themes to TV shows of the early 1950s...see if you can identify them all.
I found out that Bob Bachelder is still active and leading an orchestra in the area north of Boston. I hope he's tickled to find one of his records in a blog... 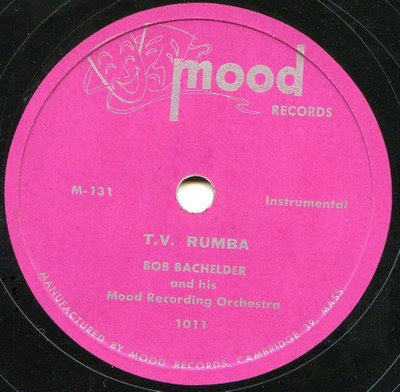 And that's it for another installment. As Bob and Ray would say, write if you get work...and hang by your thumbs. And remember...they're milder...much milder.
Posted by ZorchMan at 10:15 AM 16 comments: