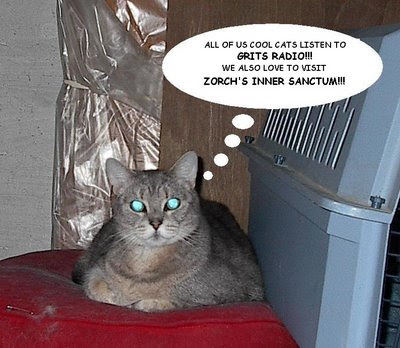 As I mentioned the last time, I was a guest on Grits Radio a week or so ago. We played a batch of my favorite sides. I was a bit nervous, but it was a blast. It was a completely new experience...for me, anyway. We'll do it again sometime soon...maybe the next time I can remember to shut my mic off when I'm not using it! And I'll try to remember to announce the tracks better.

Oh...that handsome kitty above is Elvis, who rules the Grits Homestead. I took this picture that night (and wrote the word balloon too). I didn't do anything to his eyes...they just glow blue when hit by bright light.

The other day, Mr. Grits posted the entire broadcast in his blog (http://gritsradio.blogspot.com/2009/04/gritszorch-show-no-1.html) in one large file...you can hear it all in one swell foop there.

Anyway...I wanted my mom (who has neither shortwave nor internet access) to hear the broadcast. I took the raw file, cut anything before the Route 66 Theme (and the spots at the end), and broke the long file into bite-sized chunks, each with individual titles, so she'd have an idea what I played that night.

Thanks to the Area 51 regulars who commented (through a chat line) from time to time...

Also, thanks to Bruce The B (aka Metal-Muncher) for sending an encouraging email to us during the broadcast with a half-joking request for The Monkees' Zilch. I'm glad Grits had the cut so we could sneak it in.

I'll try to remember to bring a couple of yellow-label Atlantic 45s (or their digital equivalent) next time around. Bruce digs them. I did play Jockomo (which was originally on Checker), which has a good Lee Allen tenor solo...Allen's on at least a couple of sessions that Atlantic issued in the yellow-label days.

I got the following 45 from Bruce a couple of days ago...which I'll dedicate to the Area 51 folk and anyone who remembers Top 40 Radio from Ye Olde Days.

I just found out that Bob Arbogast recently passed away. More can be read here: http://illfolks.blogspot.com/2009/03/bob-arbogast-dies-50-years-after-chaos.html (and you can see the rare picture sleeve there too!)

A few weeks ago, I transferred a couple of ten-inch LPs of the famous WNEW Saturday Night Swing Sessions of 1947. One of the cuts therein has an interesting title...one that reminds me of the Area 51 folk.

1. A couple of weeks ago, Christopher DeJohn offered an intact Columbia jukebox pack of Columbia Seven singles, complete with title strips and packaging (for a 1962 Mahalia Jackson LP) on eBay. I wrote to him, inviting him to look at my blog, especially my recent post on Columbia Sevens. I asked if I could use a few images of this important find. Shortly thereafter, I got a few very nice pictures indeed. These are the most interesting ones, I think!

This is the front of the package: 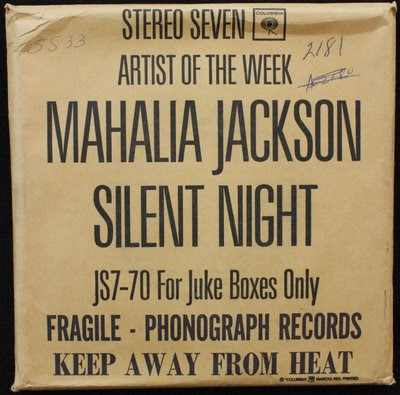 And its contents, in situ: 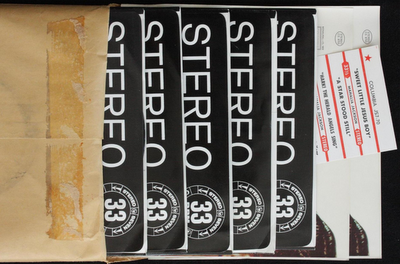 One of the two enclosed cover slicks and the title strips: 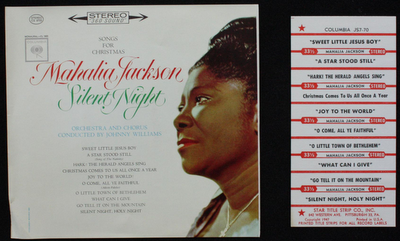 ...and all five records in sleeves (without the "record store" blurb at the bottom): 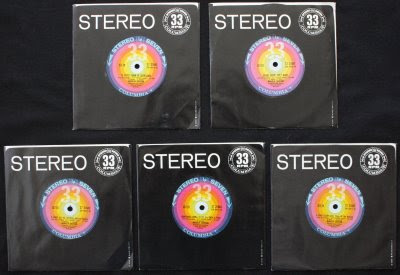 ...and the label for the title track. Notice the font is quite different from the ones I published previously...and the matrix number switches from 9:00 to 3:00 position. These variations could be chalked up to different pressing plants. 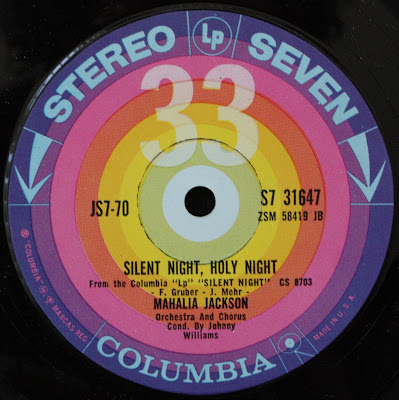 Again, I thank Chris for sharing these pictures with the Zorch people...

2. It looks like I tickled Bill Reed's fancy sumptin' fierce when I posted that li'l Blossom Dearie record. He asked if he could use it in his blog. Of course I said he could...and he did.
He also gave me a nice plug at his blog...here it is: http://people-vs-drchilledair.blogspot.com/2009/04/httpzorchv38.html . Thanks again, Bill!!

3. Something to think about...another Friend Of Zorch, Mr. Grits (blogmeister of http://gritsradio.blogspot.com/), has asked me to participate in his first official shortwave broadcast this Sunday, 5 April from 6:30--7:30 PM EDT. We'll be spinning records (well, virtual ones, anyway...I don't want to drag some 78s around with me) and chatting. If you don't have a shortwave receiver, don't fret...run over to http://gritsradio.pmlol.com/ and click on "Listen live." As long as you have Winamp or MusicMatch (or something similar), you should be able to listen. Actually, you could visit Grits early (and keep it in your favorites...he plays some dynamite stuff)...we'll probably start an hour or two earlier on a web-only basis. It's just from 6:30--7:30 we'll actually be on the ether too. We'll be taking phone calls too...tune in and enjoy!
Oh, Kenneth, the frequency is 5.110 MHz.

Posted by ZorchMan at 3:25 AM No comments:

It's April First! (No worms allowed!) 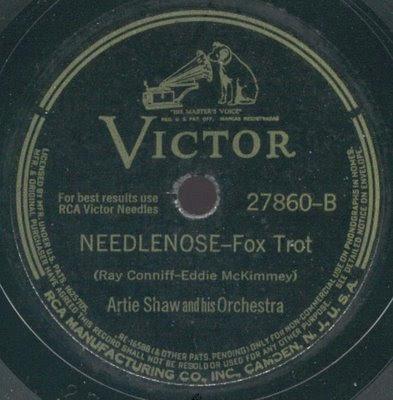 This was one of the first jazz records I had ever heard...I had it as part of the RCA Victor Encyclopedia of Jazz set of ten-inch LPs (Volume 2, to be exact). It introduced me to Bix Beiderbecke when I was eight or nine years old.
Those old ten-inchers were available through supermarkets, which explains why they're so common...especially the first couple of volumes. But the original 78 of Barnacle Bill took me a long time to snag...over twenty years.
Anyhoooooo......this is a stock arrangement of the tune...but with some space for solos added. The first verse is pleasant enough, and the answering verse is all right too. Notice that the fiddle plays through the first two repetitions of the title...but on the third one, the fiddle stops and a new voice joins the chorus. That's Joe Venuti. More about his infamous contribution to this record in the next paragraph.
After a blazing Bix solo, Carson Robison and friends go through the second verse. Pay close attention to the answering verse this time around...Mr. Venuti can be heard above the others singing "Barnacle Bill, the sh#thead!" He sings it on all three repetitions this time around (it probably wasn't all that audible in 1930, but it's fairly plain on newer equipment). 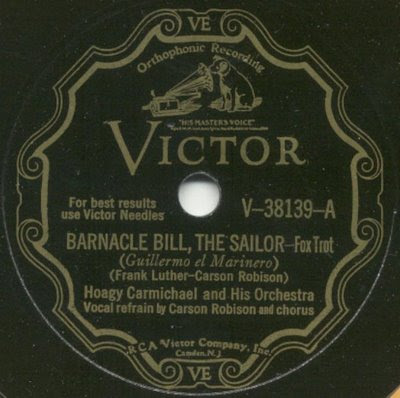 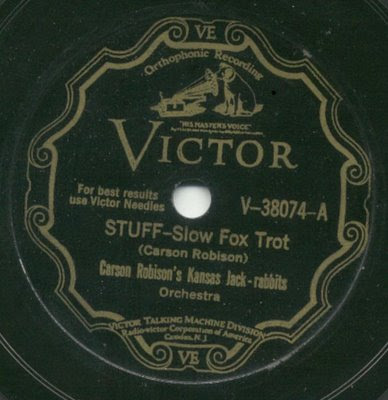 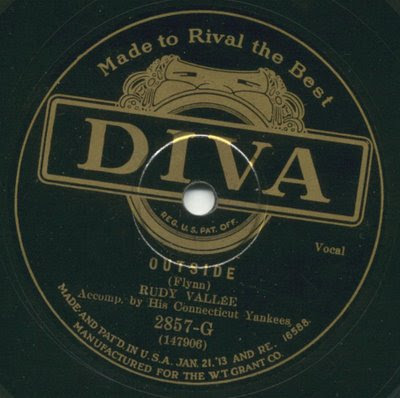 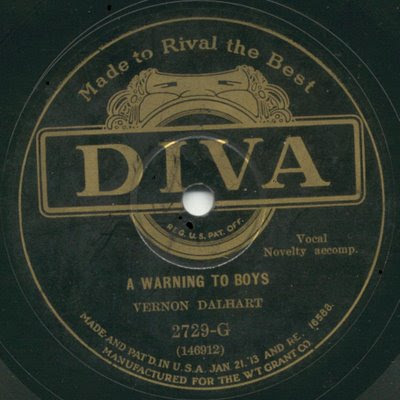 I expected to hear Dalhart sing a moralistic fable. About halfway through A Warning To Boys, I realized that not only was this fable a parody, it was essentially the same song that W. C. Fields sang in his short film, The Fatal Glass Of Beer (you can see it here http://www.youtube.com/watch?v=uYDKmEF85CY and the song starts around 2:10). Eventually I found that this song and its mate A Warning To Girls, were written by Charley Case in 1907.
146912 A Warning To Boys Vernon Dalhart Diva 2729-G http://www.box.net/shared/kqro92g70b
146913 A Warning To Girls Vernon Dalhart Diva 2729-G
http://www.box.net/shared/fufxa7cefn
NYC 28 August 1928: Vernon Dalhart, vocal; unknown, harmonium. 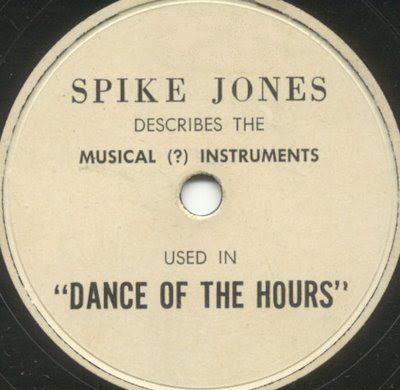 Spike Jones Describes The "Musical" Instruments Used In "Dance Of The Hours" Spike Jones RCA promo, unnumbered
http://www.box.net/shared/soq98v7zly
1949: Spike Jones & Dick Morgan, speech; samples of their record of Dance Of The Hours.
Jones's speaking voice was rather pleasant...and guitarist Dick Morgan's voice is just plain goofy.
The other side of this special promo issue is the song itself: 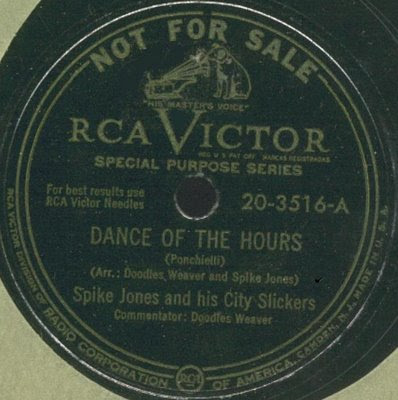 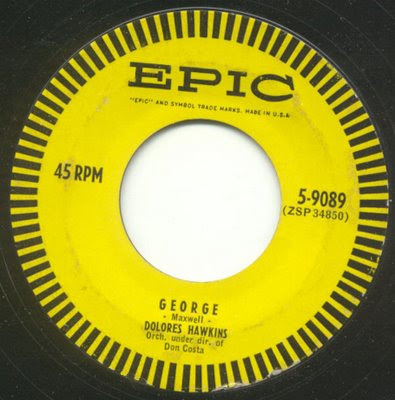 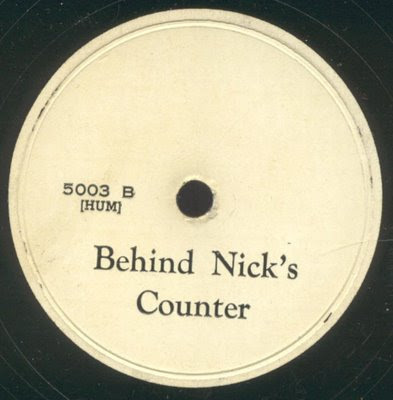 (LO-340) Behind Nick's Counter Anonymous white label party record 5003
http://www.box.net/shared/59yoe71dfr
Hollywood, October 1936: Cliff "Ukulele Ike" Edwards, vocal & ukulele; others unknown.
The first issue of this title (on the Hollywood Hot Shots label) was called Down Behind the Counter at Nick's. This is a later dubbing of it. Oh...I'm not responsible if you suddenly have When You Wish Upon A Star stuck in your head for the rest of the day. Ike does that to people sometimes.

Here's the flip side...also issued anonymously. Can't say I recognize this guy, though (beware! The language here is a bit rough)... 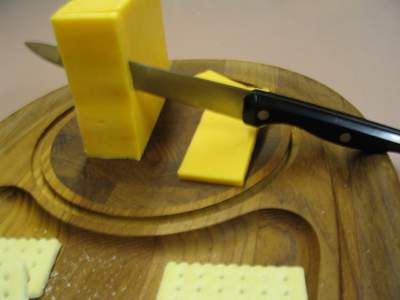 And now some records that deal with rude noises and/or the bodily functions that cause them...

Here's the side that Ed Reynolds usually plays any time there's a new person at the listening session:

This may be the first recorded song about, well, wind... 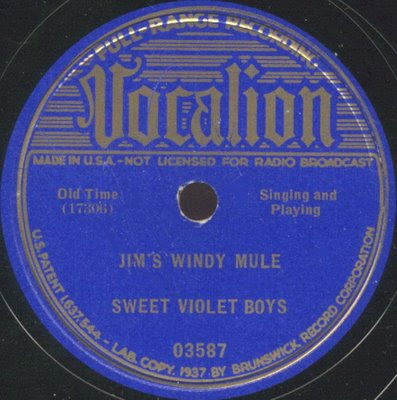 This is actually the Prairie Ramblers...many of their novelty records were issued under the Sweet Violet Boys name (and they usually backed up Patsy Montana without label credit too). It was recorded in 1935, but it sat in the can for almost two years before it was finally issued as the flip side of their Sweet Violets No. 3. I've seen it reissued as a red-label Columbia, so it must have sold fairly well.
Here's another side by the boys:

And that should be enough for now...I have to go milk the elk.
Posted by ZorchMan at 1:14 PM 4 comments: