Some (darkly) sweet sounds for December

A few weeks ago, I downloaded a most intriguing compilation/mixtape from http://holywarbles.blogspot.com/2011/11/va-dark-sweets-soothing-sounds-of.html . I then played it. About halfway through, I heard Nat Shilkret's Bolero, and a bit later on, Madame Riviere's Paahana Hula. I said to myself "Interesting...these sound like my copies!" I thought the pattern of clicks and noises on those cuts (which are unique as fingerprints) sounded a little too familiar to be merely coincidental...maybe I caught someone with his hand in my cookie jar.

So I wrote in and asked if those were, in fact, my transfers. The Wise Old Owl at the Warbles thanked me for not losing my cool, and confessed that they were indeed "borrowed" from my blog.

Now, I have no problems with people downloading my materials...nor do I mind my records being used in someone else's blog. But I must ask for credit somewhere in the posting (just as I give credit to someone else if I borrow something for mine). Actually, I'd appreciate advance notice, if only to prepare some sort of response...at the minimum a plug for the borrowing blog, and perhaps a special cut or two in dedication.

There are now links to my blog on my two cuts at the Warbles.

Actually, I'm rather flattered to hear some of my records being used as part of a larger audio collage. And Dark Sweets is just too fine a compilation for me to nitpick much.

Now that's all been said, here are some tasty sides for friends Moahaha and Owl at Holy Warbles:

I recently found this somewhat battered, but very interesting 78...it was loved a little too much, and it had seen some moisture at some time in the past eighty years, making the gold print on the green Columbia label extremely faint. But I could (barely) make out the word "Criolo" and thought I'd take a chance on it. I'm glad I did!

It's by a Cape Verdean/American group...I can't find much info on them, but according to http://www.afropop.org/multi/feature/ID/881 Johnny Perry’s Instrumental Criolo Trio featured the legendary fiddler Boboy de Tai of New Bedford, Massachusetts.

A few years ago, an old 78 collecting pal of mine gave me a copy of Cabo Verdranos Peca Nove (Cape Verdean Piece Number Nine) by Abrew's Portuguese Instrumental Trio. I was very much impressed, especially by the fiery fiddling on the bridge. When I played it for a group of collectors a short time later, they were equally impressed. Eventually it showed up on the Old Hat compilation Folks, He Sure Do Pull Some Bow!

The tango on the other side is lovely...but there is a serious flaw in my copy. There's a deep thumbnail-sized edge flake that made the first half-inch of the record unplayable. I filled the divot in with nail polish. The damaged section still goes "thunk, thunk, thunk," but at least it can now be played.

Last year I found a second record from the same session! This record has an edge flake, too...although it's not as bad. And the overall condition is a little rougher. Oh, well. These X-series (originally for export) Columbias aren't very common. I'm glad I have these records...in any condition. (I had to borrow this scan from Popsike until I get my scanner going again) 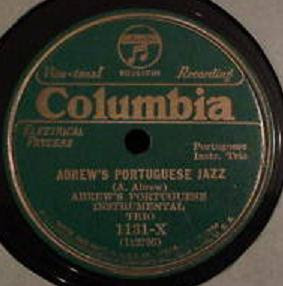 Since all the Cape Verdean sides were on green-label Columbias, I think I'll include one that was on a red one:

Why this lovely side stayed in the can until 1940 is anybody's guess.

I also want to thank Radioman David G. and Joan McG. for their kind donations a while back...I'm sorry it took so long for me to get around to acknowledging you.

seasons greeting, brother zorch. such a stellar drop. coincidentally enuff, in the next few daze moahaha & yers truly shall unveil yet another 78 mixtape, and as synchronicty would have it, abrew's tango portuguez will be thoughtfully included. the transfer i have is pretty sweet, methinks. thanks fer the kind acknowledgements & inspiring dedication

Very cool, Owl! Looking forward to it!
Glad you liked my sides, too!

Welcome back, Zorch... and thanks as always for the sounds, most especially for the long-unheard.

Thank you so much for posting the portuguese and capeverdian songs. It is very instructive... Regards from Lisbon.

Once again, sir, you rock my world with the heavenly sounds of the Abbew group. I love the Columbia X series, and records like these are the very reason for my affection. My heart leaps whenever I see that green and gold label... altho' it's more likely to be a musically worthless Scandanavian disc... the Hispanic/Caribbean ones are treasures, each and every one!

Thanks to all for the nice comments.

Those Columbia -X series are often interesting...I have a few others with a matrix beginning with a P...all of Portuguese music (probably recorded there, hence the P?). Some of those are absolutely fantastic!

And "Guatemala Blues" was an -X series item as well...

For the record, some of the sides in the various other ethnic series are rather nice. I recently found a Polish one that's a medley of two or three tunes, one of which is virtually identical to "Flop-Eared Mule." I'll post it sometime...

Yep, Polish string bands are great, too. One of the few blue wax Columbias I own is of a Polish fiddle band.

Generally, the Scandanavian, Finnish, Swiss and similar discs do nothing for me. I know people who like 'em, though!

Hey Zorchman, where are you? You're missed!

Zorch...just want to thank you for the Abrew's Portuguese Instrumental Trio tunes. Had everything but "masurka no meu pae".
Augustus Abrew (Abreu) is my great grandfather and it's nuts to hear his music. BTW actually have his violin...but do not have any records. If you are ever interested in selling yours, please let me know.

Any chance you could re-up these? I'm familiar with the Abrew cuts on the "Folks, He Sure Do Pull Some Bow" and "Raw Fiddle" CD's and they're both outstanding. I've never heard anything by John Perry's group. Regardless, hope you're doing well!

I’ve been following your blog on old recordings because I’m studying the history of Cape Verdean music, and I’m interested in how European musical styles such as the Mazurka, the Polka, Waltz, started to influence African music.

I’m most interested in the Cape Verdean groups who recorded with Columbia during the 1920s and 30s, so I’d like to know if you are aware of sources where I could obtain recordings from this period which have not been used in compilations such as "Portuguese String Music", and "Folks, He Sure Do Pull Some Bow".

I’ve been collecting information from old magazines about these recordings, with some titles os songs, and am happy to share it if you would be interested.

I’d be very grateful for any help or suggestions you can give me. Maybe you could give me your email address for easier communication, mine is glaucia.nog@gmail.com.